Skip to content
As an Amazon Associate I earn from qualifying purchases. Thank you for your support! 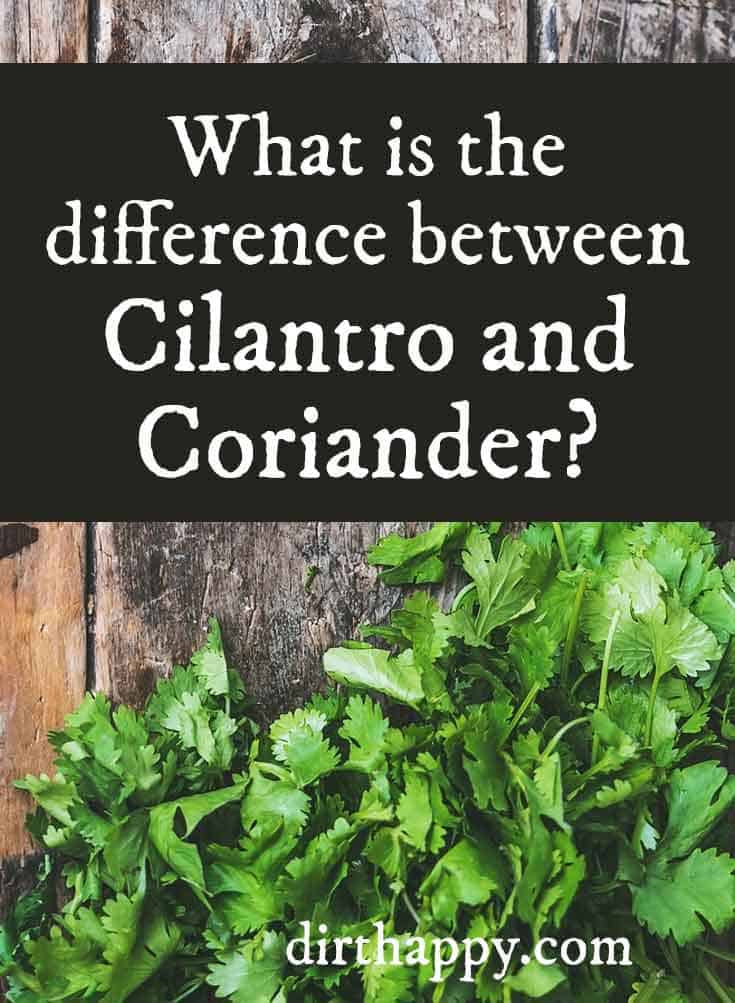 You may have sometimes hear coriander and cilantro being used interchangeably and wonder if they are the same thing. If you’ve been wondering the difference between coriander vs cilantro, we’re here to help explain how the two are alike, and how they are different.

Are Coriander and Cilantro the Same Thing?

This perhaps is the most popular question about coriander and cilantro. While they are very similar and do come from the same origin, in most recipes they are different things – and have different flavors as well!

Because they come from the same plant, it is easy to understand the confusion, especially if you are growing your own kitchen window herb garden!

The difference between whether to use cilantro or coriander all depends on which part of the plant you are using in cooking!

Cilantro is the Spanish word for coriander, and is often used when describing the plant and its leaves – even when not in an area where Spanish is the primary language. Some recipes will call for fresh coriander, and in this case it typically means the leaves. However, more often than not coriander actually refers to the seeds.

Here are the Differences Between Coriander vs Cilantro:

Cilantro typically refers to the fresh leaves of the plant. Cilantro is often used fresh in recipes such as salsa and gaucomole. Cilantro is the Spanish name for fresh coriander, so this is why we often use the word cilantro!

When you are cooking with cilantro, you often need to add the leaves to the recipe to the very last part, otherwise the leaves will lose much of their flavor. Cilantro is commonly used as a garnish in fresh dishes that are not cooked.

Coriander typically refers to the seeds of the plant in most recipes. The seeds are small and round, and have a warmer and spicier flavor than the leaves. It is often used in soups and meat dishes.

If the recipe calls for fresh coriander, then it is possible it may be referring to the leaves, but not always.  Keep reading to our next question to understand how to know the difference in your recipes!

Now we are ready for the next famous question about cilantro vs. coriander!

While both come from the exact same plant, it’s important to know they do not have the same flavor, and they are prepared differently when you are cooking with them.

Coriander, the seeds of the plant, have a much warmer and spicier flavor than cilantro. Coriander holds up to the heat from cooking on a stovetop better than cilantro. This is why coriander is often called for in soups and meat dishes, since those dishes require a bit of cooking time.

Cilantro, the leaves of the plant, do not do well in recipes that are being cooked. Sometimes also called “Chinese Parsley”, it’s best to think of it as a flavoring garnish that you add at the end of a recipe after everything is cooked. The heat from cooking on the stove or oven often causes the leaves to lose much of its flavor.

How is Coriander Different From Cilantro in Cooking Recipes?

They both have different flavors. Also, depending on the recipe, one is more suitable for cooking over heat. This why with cilantro the leaves are very popular for dishes that aren’t cooked – such as many fresh salsa recipes and guacamole made with avocados.

Another factor to consider is storage and preservation of the herb. Coriander seeds keep their flavor longer when dried and stored – cilantro leaves when dried do not have nearly as much as the same amount of flavor!

The Good News: If You Learn How to Grow Cilantro You Can Have Both!

Since they come from the same plant, it’s a great idea to learn how to grow cilantro! It’s a very easy plant to grow, and while it has a short lifespan, you can often time it so that you always have steady supply of cilantro to cook with in your favorite recipes.

Learn how to grow cilantro and once you understand how to harvest the leaves and the seeds, you can enjoy cilantro and coriander in all of your favorite recipes year round!

Hopefully this will help clear up all the confusion between coriander vs. cilantro! The two come from the same plant, but they are definitely different parts and used for different things!

Do you have any questions about cilantro vs. coriander? Do you like one over the other? Which one do you use the most? Have you ever substituted coriander for cilantro? Could you tell the difference? Share your thoughts in the comments section below!